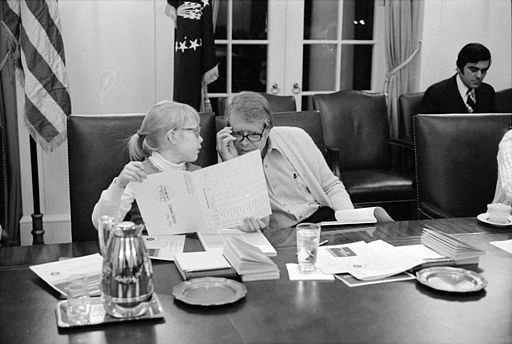 The White House is truly a family affair – did you know all 45 U.S Presidents have been fathers? In honor of Father’s Day, we’re taking a look at some memorable stories from some of the most famous dads in the country.

Most high school seniors have their parents drop them off at their prom. Gerald Ford’s youngest daughter, Susan, went one further and held hers in the White House!

Snakes in the White House!

When Teddy Roosevelt was quickly ushered in as President in 1901, his daughter Alice would fast become known as the rabble-rousing child of the White House. When she wasn’t sliding down the White House stairway railings, she was terrifying guests with the snake she carried around in her bag. (Brother Quentin didn’t make things much easier – he once ran a toy wagon through a priceless full-sized portrait!) To help keep her out of trouble, Roosevelt made her a White House hostess, and would often send her in his place if he couldn’t attend an event.

Playful in the Presidents’ Palace

President John F. Kennedy’s children had no lack of enjoyment while living in the White House! They certainly made Dad’s job interesting, whether it was daughter Caroline’s pony roaming the grounds or John Jr. hiding under his desk.

Making the East Room her Own

While Amy Carter had a more famous residence than most kids while growing up in the White House, she played around like any other kid – often roller-skating around the East Room, or helping dad out with some reading.

Chelsea Clinton was just twelve when her father Bill Clinton became president, but they were close, despite the combination of teenage angst and her father’s busy job! In 2013, former President Clinton was named Father of the Year by the National Father’s Day Council! Currently, Chelsea and Bill even host their own podcast together.

Your father might be the president, but that probably won’t stop him from embarrassing you if you’re a teen. While in his presidency, Barack Obama never let us forget he was a dad as well. One example? Pardoning a Thanksgiving turkey with daughters Malia and Sasha, while including plenty of dad jokes.

P.S. While we’re talking “dads,” keep up the Father’s Day celebration with some of our employees’ favorite dad jokes!