A World of Innovation – Where Popular Inventions Were Created | WorldStrides
WorldStrides 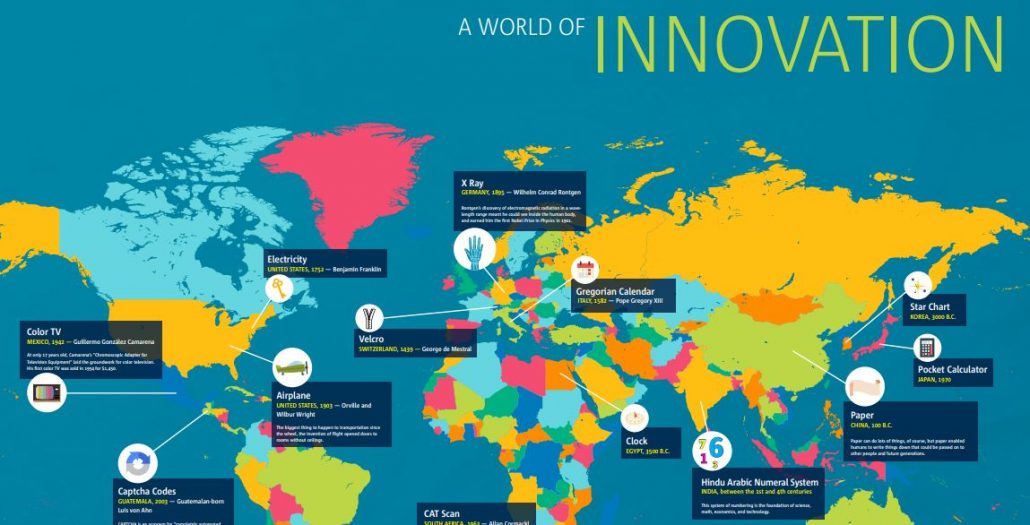 A World of Innovation – Where Popular Inventions Were Created

Do you ever think, “I wonder who was the first person to think of {insert world-changing idea here}….” Like, who created peanut butter (Answer: 3 people get credit for that staple of the modern sandwich)? Or who decided we should all go to school (Answer: Horace Mann is the “Father of the Common School Movement”)?

Great ideas large and small come from people all over the world. Our new map shows you some of the most influential inventions from around the globe. Below, learn a little more about these major creations (and a few we threw in for extra credit), plus the details behind how (and where!) they came to be.

Wheel
Where: Western Asia, near the Tigris-Euphrates River
Who: Mesopotamians
When: 3500 B.C.
The Big Deal: For three centuries, the wheel was used mainly to make pottery, then it got turned on its side, given an axle, and – voilà – you’ve got an engineering game changer with a bazillion applications. Just think of all the inventions since that utilize wheels. It’s so great, why reinvent it?

Compass
Where: China
When: 300-200 B.C.
The Big Deal: Early models used lodestone and naturally magnetized mineral, forever moving navigation from the stars to the palm of your hand. Fast-forward to the 21st century, and pretty much everyone has a navigation map still in their palm…now it’s just on their phones!

Paper
Where: China
When: 100 B.C.
The Big Deal: Paper can do lots of things, of course, but paper enabled humans to write things down that could be passed on to other people and future generations. Huge deal. The first paper was made out of mulberry tree fibers that were pounded into sheets.

Printing Press
Where: Stasbourg, Germany
Who: Johnnes Gutenberg
When: 1439
The Big Deal: The move from writing everything by hand to machine revolutionized the ability to share information quicker, cheaper, and basically just more efficiently in every way possible.

Electricity
Where: United States*
Who: Benjamin Franklin*
When: 1752*
The Big Deal: Why all the asterisks? Franklin can’t get all of the credit. Electricity had been studied for centuries, but it was his famous kite flight that gave us the understanding we needed to power on. Franklin’s experiment* involved tying a key to a kite and flying in during a thunderstorm, and yes, this explanation needs yet another asterisk – *don’t try this at home! Fun fact – there’s even a painting depicting the kite flight on display at the National American History Museum in Washington, D.C.

Airplane
Where: Kitty Hawk, North Carolina
Who: Orville and Wilbur Wright
When: 1903
The Big Deal: The biggest thing to happen to transportation since the wheel, the invention of flight opened doors to rooms without ceilings. Today, there is an average of 9,728 planes flying in the sky at any given time. So much has changed since that first operational airplane, but you can still see the original on display at the Smithsonian National Air and Space Museum!

Hindu Arabic Numeral System
Where: India
When: Between the 1st and 4th centuries
The Big Deal: This system of numbering is the foundation of science, math, economics, and technology – no big deal. Can you imagine where we would be without numbers?

Gregorian Calendar
Where: Rome, Italy
Who: Pope Gregory XIII
When: 1582
The Big Deal: Pull out those planners! The most widely used civil calendar today, the Gregorian Calendar literally got the world’s accounting for time on the same page. Here’s to consistency!

Clock
Where: Egypt
When: 3500 B.C.
The Big Deal: Obelisks, using light and shadow, were the earliest models for telling time. Two-thousand years later, the Egyptian sundial scaled things down and heightened our ability to know when school starts. Now, we wear clocks on our wrists. Mind. Blown.

Soap
Where: Western Asia, near the Tigris-Euphrates River
Who: Mesopotamians
When: 3000 B.C.
The Big Deal: With a combination of animal fat and wood ash, basic hygiene is born, prolonging life with better health and cleanliness. We’ve been using soap ever since, just thankfully with much more appealing scents than the early version.

Electric Light Bulb
Where: United States
Who: Thomas Edison
When: 1879
The Big Deal: Let there be light! Edison patented the first commercially practical incandescent light which would open our nights to completing the tasks only previously possible in the daytime. So, you can thank Edison for all those late nights pouring over homework. Pro tip – check out the “Lighting a Revolution” exhibit at the National Museum of American History. It’s illuminating!

Wristwatch
Where: Switzerland
Who: Patek Phillipe
When: 1868
The Big Deal: The ability to keep time on your wrist proved to be a crucial benefit to aviators, the military, and regular folks alike, not to mention adding an actual function to jewelry beyond looking fancy.

Velcro
Where: Switzerland
Who: George de Mestral
When: 1955
The Big Deal: Leave it to a dog to introduce to George the principle of a hook and loop fastener. Investigating why burrs stuck to his dog’s fur, he got the idea for Velcro, and astronauts have been happy ever since.

X-ray
Where: Germany
Who: Wilhelm Conrad Rontgen
When: 1895
The Big Deal: Rontgen’s discovery of electromagnetic radiation in a wavelength range meant he could see inside the human body, and earned him the first Nobel Prize in Physics in 1901.

Internet
Where: United States
Who: Department of Defense
When: 1960s
The Big Deal: In case you didn’t already know, the internet changed everything. How important is it today? Just think about how you feel when the WiFi’s down. Fun fact – the internet is not to be confused with the World Wide Web, which was invented by scientist Tim Berners-Lee in 1990. The web is actually just a way of accessing all the information on the internet via websites and links.

CAPTCHA Codes
Where: Guatemala/Pittsburgh
When: 2003
Who: Luis von Ahn
The Big Deal: Those funny numbers and letters used by websites to confirm that you aren’t a bot, CAPTCHA is an acronym for “completely automated public Turing test to tell computers and humans apart.” The term was coined by Guatemalan-born von Ahn and his team at Carnegie Mellon University.

Color TV
Where: Mexico
When: 1942
Who: Guillermo Gonzalez Camarena
The Big Deal: At only 17 years old, Camarena’s “Chromoscopic Adapter for Television Equipment” laid the groundwork for color television. His first color TV was sold in 1954 for $1,450.

Pocket Calculator
Where: Japan
When: 1970
The Big Deal: The original calculator was the abacus, developed in China in the 9th century. The first hand-held electronic calculator like the ones we use in school was invented in Japan in 1970, allowing us to calculate with ease anywhere.

Teachers – get those creative juices flowing, and order a copy of WorldStrides’ Innovations map for your classroom by clicking here.

P.S. Interested in inspiring tomorrow’s inventors? Visit our Resource Library to download our “Fostering (And Modeling) Invention In the Classroom” webinar, in collaboration with the Smithsonian National Museum of American History.