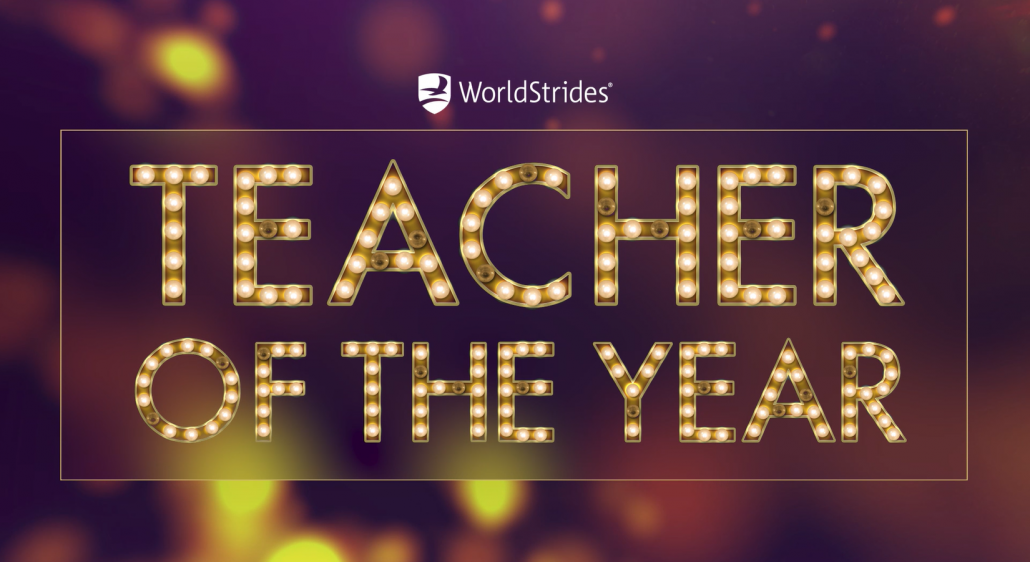 In honor of Teacher Appreciation Week, WorldStrides will be showcasing our five 2019 Teacher of the Year recipients. These teachers have gone above and beyond, inside of the classroom and out. We are thrilled to honor them for their commitment to students and share their stories!

Jason Whited is a social studies teacher at Centerville High School in Centerville, Ohio. Jason is well-known in his community for his involvement with the local VFW post, coaching the school’s varsity baseball team, and his high-energy, dynamic approach to motivating students to learn. Jason has been teaching for 13 years and comes from a family of educators; his mother, father, and sister are all involved in the field of education! He says he challenges his students to be problem solvers, empathetic leaders and valuable members of society through the exploration of American History.

Casey Lawrence, Jason’s co-teacher, believes that one of the reasons their classroom engages learners successfully is Jason’s style of teaching. “He has an engaging learning style that makes it easy for students of all abilities to be successful,” Casey explains. For example, Jason chooses a “Message of the Week” each week, highlighting important traits like hard work or honesty by telling a personal story that goes along with the topic. Casey states, “It helps students connect with him as a person, and therefore you get that bond that makes the students work hard because they respect him and they want him to be proud of them.”  Ally, a former student, says, “He takes the time to interact with us, and make a bond with us. When we’re asked twenty years from now which teacher influenced your life, he will come to your mind. He didn’t just grade my tests and my homework – he cared about how I am and connected with me on a personal level.”

In keeping with his commitment to connecting people, Jason has created and coordinated a school-wide veteran’s recognition program that has grown and evolved over the last five years. Veteran’s and active military personnel are invited to come in and speak with the students and share their personal experiences, integrating the local community into the classroom. This program’s reach has continuously grown, now reaching over 1,500 students each year. Jason also organizes other events for veterans, including baseball and basketball games in which veterans are recognized, as well as donation drives for Adam’s Hope, a local non-profit. Through these, students are able to see that war is about more than just the words in their textbooks.

Fred Rojas, who is both a veteran participant in the program and a parent of two of Mr. Whited’s students, nominated him for WorldStrides Teacher of the Year. “He really wants the students not to forget what has happened in the past with our country – not just the wars and what’s written in the history books but going beyond that,” Rojas says. “Combined with his passion for teaching and his interaction with the students, it really makes a huge difference.”

Outside of the classroom, Jason is the Centerville High Varsity Baseball Coach.  Through this, he mentors young men to “develop responsibility, a diligent work ethic, sacrifice, teamwork, accountability and the humble celebration of success,” says Centerville High East Unit Principal Jack Durnbaugh. “He’s a true professional who I can always count on.  He is one that I would never hesitate to ask for honest feedback or advice.  His work in and outside of the classroom positively impacts students, staff, parents and our community.”

A fellow Centerville coach, Brook Cupps, believes that Jason’s ability to connect with students, makes him stand out as an educator: “There’s isn’t any question – this is what separates him from other teachers – his ability to connect with different types of students at all levels, regardless of their background or what they do. He genuinely cares about the students.”

Through his work, Jason touches not only the community within Centerville High School, but also the entire Centerville and Dayton community as a whole. And he’d love to see more educators following his blueprint! See some advice Jason has for other educators below!