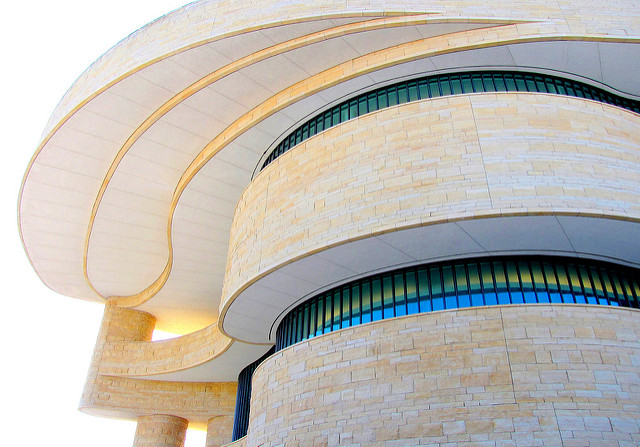 A Special Musical Moment at the Museum of the American Indian

Last Thursday dawned crisp and cold with a bright blue sky and the cherry blossom trees in near-full bloom.

I was fortunate enough to be leading a tour group to the Smithsonian’s National Museum of the American Indian. This was a scheduled stop on their itinerary and although they had spent the previous 4 days with me seeing the sights of Washington, Arlington and Mount Vernon, today had promised to be the highlight of their trip. The teacher who had planned this journey had specified that this particular museum was a must-see. So we made that happen.

As it turned out, we were the first to enter the museum right at 10 am. After passing through security I gathered my group together to discuss a meeting place and time. As we made our way toward the central open space on the ground floor one of my chaperones approached me. This was a gentleman named George and he had come on the trip with his grandson.

But there was more to George than simply a desire to spend some on the other side of the country with a family member. George is a Native American, descended from an indigenous Alaskan tribe. He had called ahead to the museum to ask permission to play his flute in the rotunda of the museum. The museum had acquiesced.

George stepped into the central circular area, the focal point of the museum’s ground floor. Some of us gathered around the perimeter as he removed his flute from its case. It was an authentic wooden flute. George stood there in that rotunda dressed in his straw cowboy hat, jeans jacket with its embroidered Seattle Seahawks logo on the left breast, dangling silver earrings and a proud expression on his aged face.

George held his flute up above his head, speaking a few words in his native language. He then turned and repeated the gesture, facing each direction as he did so. Then he began to play.

Many of the students in our group began to gather around the circle, keeping a respectful distance. Then other guests of the museum began to gather, senior citizens, college-aged tourists, families with small children and the occasional stroller. The crowd grew and grew with barely a din. Occasionally I heard a hushed whisper from a parent to a child but the predominant sound was that of George’s flute. It was a flowing, beautiful sound. Each note was perfect, never flat or sharp and the tune transported us to the sky, as if we were floating above a splendid green, blue and brown landscape unmarred by buildings and roads. George played with an emotion, a determination in his eyes when they were open and a sense that the flute was controlling him and his body when his eyes were closed.

When the song ended we were all in too much awe to applaud. But the claps came. Slowly at first then into a brief uproarious applause. George gave the slightest of bows, really just a slight nod, then he said “thank you”. He followed that with a statement telling us how honored he was that we allowed him to play for us.

No sir, George. I assure you, the honor was all ours.