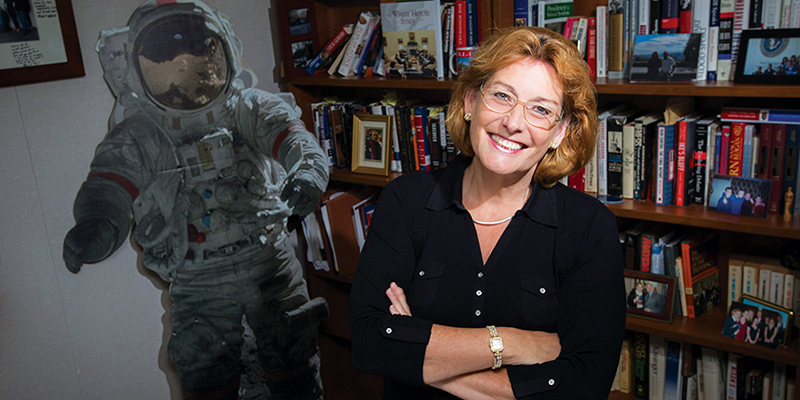 Shirley Anne Warshaw is Professor of Political Science at Gettysburg College, Gettysburg, Pennsylvania and holds an endowed chair, the Harold G. Evans Chair of Eisenhower Leadership Studies. Her research focuses on the domestic and international policy implications of decision structures in the White House. She has written ten books on presidential decision-making and numerous book chapters and journal articles, and has been a consultant to PBS, an editorial consultant, involved with the presidential debates,  and serves on the Council of Scholars for the Center for the Study of the Presidency. Dr. Warshaw is a frequent speaker on National Public Radio, a guest columnist, and commentator on radio and television on presidential leadership.

When you bring your students to Washington, D.C. for Smithsonian University Travel Program’s Inauguration 2017 experience, you’ll meet Shirley Anne Warshaw at our panel discussion, “The Presidency and the People.” She’ll join with colleagues to share a lifetime of research on this powerful institution, and reflections on the new president.

Dr. Warshaw is just one of a heavy-hitting lineup of experts you’ll meet as part of this unique Smithsonian University Travel Program. Learn more about our Smithsonian expert, Dr. Warshaw.

WorldStrides: How did you get into your field and, particularly, how did you zero in on the presidency?

Dr. Warshaw: Life is serendipity. As much as you plan your career, things change it. In my case, my first job after college was with the governor’s office in Pennsylvania. I became very interested in executive power and the role of the governor. When I left that job to get my doctorate at Johns Hopkins, they had an expert on the American presidency in residency. I had been at the peak of state power, and then there was the power of the presidency. I was interested because I believe they are very, very similar.

WorldStrides: Tell us your favorite anecdote about the presidency or a president in American history.

Dr. Warshaw: In 1962, of course, President Kennedy was involved in the Cuban Missile Crisis, which lasted for 13 days, October 16 to 28. He brought together a group of people to help him solve the crisis called the ExCom, the executive committee. At the end of the crisis, there is a little known story, but so telling, that President Kennedy called up Tiffany’s in New York and had them make a paper weight. It was about a 4 x 4 piece of wood and on top of it was a silver calendar of the month of October. The days of 16 to 28 are slightly raised. And it just says, “Thank you” and is signed “JFK.” It’s incredibly moving that [the men of the ExCom] would put that paperweight on their desks and realize that they helped to save the world. By the way, [the ExCom] was all men, but JFK also gave his secretary, Evelyn Lincoln, a paperweight.

WorldStrides: Looking at the current presidential race, what stands out as most different from the landscape in the past?

Dr. Warshaw: For me, it’s the absence of the influence of political parties. Throughout most of American history, the parties played a significant role in choosing the nominees. They had the money. They did the organizing on the ground. They owned the process. Today, the parties essentially play no role because of the independence of candidates to raise their own money. What you see this year is the ability of people like Donald Trump, perhaps Michael Bloomberg, who are self-funded, to shape the presidential race. What I think we’re seeing means a crisis for political parties. Do they become less of a national presence and more of state presence, or does the fact that Congress is dominated by the parties continue their importance to the political process?

WorldStrides: What advice do you have for students interested in pursuing a career in politics or political science?

Dr. Warshaw: The first thing is whatever career path you choose, be passionate about it. You want to wake up every morning and be excited about the challenges that the day will bring. Secondly, for my students, I strongly encourage them to become engaged in public service. There is nothing more rewarding to your career than making a difference in the world and I believe everyone can make a difference.

Want to know more about the experts who are part of the Smithsonian University Travel Programs? Fill out our form, and someone will be in touch with you shortly!