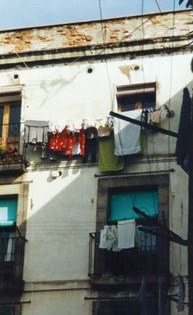 If you’ve ever been to a European city, chances are you’ve wandered through a captivating maze of alleys and streets and squares where every balcony is studded with pots of red geraniums, every wood-framed window and door perfectly catches the afternoon shadows and every turn brings yet another amazing photo opportunity. And if you’ve ever gazed around, awe-struck, and wondered what it would be like to live there, here’s the tale of what happened to me when I did.

I moved to Barcelona in 2002 and after spending a couple of months living in a shared house near Gaudi’s Sagrada Familia church, I decided to rent an apartment in the heart of the Gothic Quarter, just a few blocks from Placa Real, the main cathedral, and the waterfront.

The apartment had everything I’d dreamed of finding in Barcelona, from the towering wooden doors at the front, to the vast roof terrace with views across the rooftops and down to the sea. Inside, it had a mosaic of colourful tiled floors and vaulted ceilings, it had a big internal balcony which overlooked a communal garden and it was either flooded with sunlight or dancing with shadows. The exterior balconies were laden with flowers and overlooked a cute little plaza.

It seemed perfect at first.

Trouble was, I was so blown away by the beauty of the place that I’d failed to notice one or two key issues with this particular property. First up, it was above a flamenco club.

Yes, that’s right, a flamenco club, packed with guitars and stomping feet and clap-clap-clapping until 3am most nights. The club had no sign above the door, and the entrance was hidden behind metal shutters when we viewed the property. Needless to say, it didn’t stay hidden for long.

But that was only the start of our troubles. See, I was sharing the apartment with six other people but…we only had one front door key. But what a key it was! It was as big as my hand and looked like something from a medieval dungeon. That meant copies could not be made, apparently.

Still, we didn’t let this little problem bother us, and quickly developed a system whereby anyone arriving home would stand in the street and shout until another flat-mate heard them calling. The key would then be dropped from the third-floor balcony to the street, attached to a plastic shopping bag which acted as a little parachute. Simple.

And inside? The flat was quirky, to say the least. Most of these ancient buildings look untouched from the outside, but many have been crudely converted into smaller apartments inside.

For example, our shower cubicle was located inside a cupboard in the kitchen. We had to climb up a step to get in, which could be tricky if someone was cooking. There was no obvious reason for it, since the room with the toilet was easily big enough to be a normal bathroom. And if that wasn’t bad enough, the shower was heated by big orange gas canisters which could only be bought from the butano man who drove through the streets from time to time. If you missed him, you missed out, and that meant cold showers for everyone. For days. And so it was that one of us would be put on gas duty, which basically involved hanging out on the balcony for extended periods, ready to yell out “Butano!” when the salesman happened to pass underneath. We still missed it, of course, so I joined the gym purely for the purpose of using their always-hot showers.

But at least I had a comfortable bed, right? Wrong. I quickly discovered my bed was little more than a piece of wood resting on four plant-pots. No other furniture was provided, but thankfully Barcelona has a weekly furniture-collecting night when residents can dump bits and pieces on the street to be collected by the local authority – or by groups of scavenging students willing to drag them through the streets to their sparsely furnished homes. Within a few weeks I’d furnished my room with a beautifully carved chest of drawers, bedside table, and a metal bed-frame.

Apartments across Spain present the same conundrum – how to hang up your washing on a line that overhangs your downstairs neighbour’s balcony without dropping your least attractive underpants onto their table or into their ashtray. I’m willing to declare it’s an impossible feat. Time after time our neighbour would traipse upstairs carrying small bundles of our still-damp undergarments.

And what about those balcony doors you’ve stared at from the street – beautiful, aren’t they?

We thought so too.

But unfortunately, after two months of living in the apartment we realised that our doors didn’t actually close properly. We’d moved into the apartment in the blazing heat of August, so the doors were kept almost constantly open. It was only at the start of November, when the temperatures dropped and the wind picked up and little icons of frost were appearing on the weather reports that it dawned on us that the doors didn’t meet in the middle, or anywhere near it. And to make matters worse, we had no form of heating, no curtains and no carpets. Think of the morning newspaper blowing in the breeze on the kitchen table. Imagine ice-cold tiles against bare feet.

You get the picture.

I lived in the apartment for six months before it all got too much for me and I moved to a more modern building further into the suburbs. It was more comfortable, of course, and far more practical. But to my surprise, I actually missed my old apartment. And in some ways, I still do.

In spite of the quirks, the cold, the flamenco and all the other mishaps and annoyances that came with living in an ancient building in the centre of a noisy city, I loved it. And ten years on, I still get a buzz from strolling through the winding streets of Barcelona’s Gothic Quarter, gazing up at the rows of potted plants and the crooked balcony doors, and wishing I could live there again.