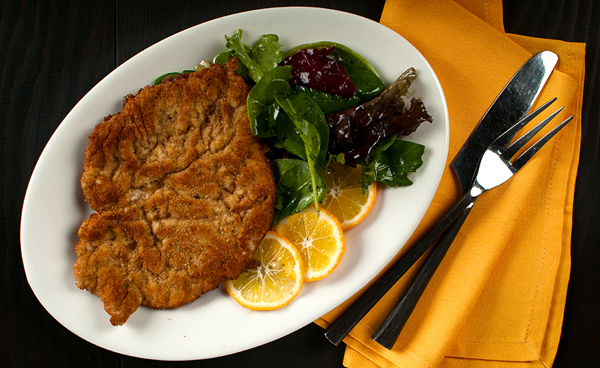 How German Is German Food?

How German is German food actually? It is traditionally very international.

Let’s start with the world famous currywurst, (chopped fried sausage in a curry sauce) it’s one of Germany’s food stars. We have even a currywurst museum in Berlin where the first currywurst was served on September 4th 1949. But do curry plants traditionally grow in Germany – no way! First of all, there is no curry plant, curry is a sauce made of various spices, and it comes all the way from India. Just like the tea with kandis sugar (rock candy) which Germans drink all day long if they live along our coasts in the North. But tea plants would freeze to death during the long German winters. Germans like to import foreign plants and make some think it’s German. Germans are so called potato eaters. We eat potato dumplings, kartoffelpuffer(pancakes), cold kartoffelsalad, soups, boiled, or fried. Even though we didn’t even know how to grow them when they were imported from the south American Andes in the 16 century, we consider them very German.

German food is German because it has been eaten by Germans in Germany for centuries, not because it really comes from Germany

Habits create traditions. So the U.S. and Germany food history have something in common but who brought the food and how old is Germany actually?

Germany as a country or nation has existed since 1871, when the German empire was founded. Before that Napoleon occupied the German land and brought some French food over the borders. Before that Germany was a real patchwork of counties and dukedoms part of the holy Roman empire. And after the Romans arrived, they cultivated wine to supply their troops, farmers, traders or soldiers brought, exchanged, and developed food and recipes overtime.

All this happened centuries ago, that’s why potatoes are considered German. But it has also happened in recent history. It happened after WWII when in the 60s so called “guest workers” from southern Europe imported new food and created Germany’s new national star: the döner kebap. Originally Turkish, now considered German. The word döner is Turkish and means “to turn”. Originally horizontally, it’s now a vertically turning big meat stick with big slices of beef, chicken or lamb which is grilled and thinly sliced; served in a bread with onions, cabbage, yogurt sauce, and often served very spicy. When you are in Germany ordering döner, often you are asked “Mit scharf?”, which means literally “with spicy?”. It’s a new manly competition for young male Germans to compare who can eat the spiciest döner.

If you’ve been to Germany, you’ve surely eaten breaded schnitzel. It’s delicious, but actually not German. It’s mainly known as wiener schnitzel, but is it really Austrian? Actually not, it comes originally from Milan in Italy, before becoming world famous in Vienna.

When you look at the regional cuisine, you see that Europe’s political history of Nations with its numerous states, especially Germany in Central Europe with its nine neighbouring countries — is pretty much the same as its food history.

Young Germans often know more about pasta, pizza and hamburgers than about their own food and its origin, like Käsespätzle, our southern cheese made noodles. German food is very regional and divers due to Germany’s huge size and central position in Europe. Seafood, rote grütze (red berry desert) and tea are the favourites near the northern coasts like our Viking neighbors in Skandinavia; the working class classic currywurst and beer in the west, mountainous apfelstrudel, bretzel or dumplings with poppy filling in the German Alps; snails, asparagus, white wine and cakes in the southwest just like the French across the border, soups and eintopf stew in the east like our Polish neighbours.

You see, German food is very diverse, traditional and yet very international. So what’s your German favourite on the menu? Tschüss und Guten Appetit!