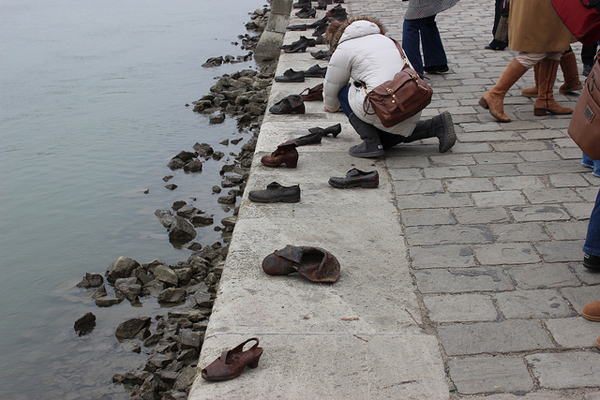 Teach Through Educational Travel: Shoes on the Danube, Budapest

Budapest is divided by the Danube River. It was formerly three cities (Buda, Obuda, and Pest), which joined in 1873 to form the city now known as the capital of Hungary. The Danube, which passes through ten countries, is an international waterway and has played an important role in the history of the city. More recently, during the final months of WWII in 1944 and 1945, Jewish people were lined up along the banks of the Danube, forced to remove their shoes, and shot by the fascist Arrow Cross army. They were situated thusly so that their bodies would fall into the river and float away.
On the 60th anniversary of WWII, a holocaust memorial was created along the banks of the Danube by sculptor Gyula Pauer and film director Can Togay. 60 pairs of time-period authentic shoes were created out of cast iron, and permanently placed on the bank between Széchenyi István Square and Kossuth Square.