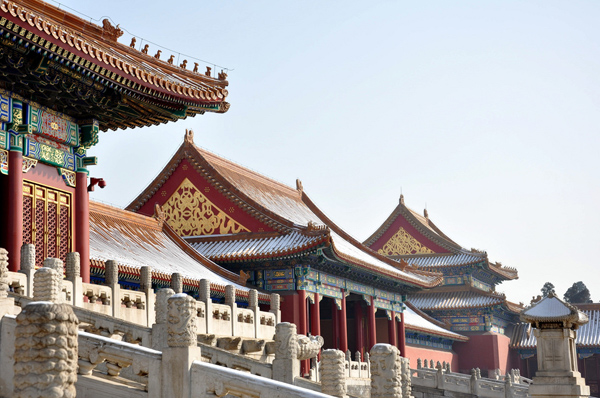 History comes alive at the Forbidden City, in the center of Beijing, China. The Forbidden City (called Gu Gong, in Chinese) was the home of 24 emperors, and was the center of politics from the Ming Dynasty through the Qing Dynasty – about 500 years, ending in 1912 with the abdication of Puyi, the last Emperor of China. The Forbidden City took 16 years to build (1406-1420), and is an enormous symmetrical palace complex, consisting of 980 buildings and thousands of rooms. It was built from precious wood, marble, and golden bricks, by over a million workers and a thousand artisans, pressed into hard labor. It is now a World Heritage Site, and proclaimed by UNESCO to be the largest collection of preserved ancient wooden structures in the world.In 1925, the Forbidden City began to be administered by the Palace Museum. The Palace Museum is currently carrying out a restoration project, which is expected to take 16 years. The Forbidden City is the best preserved imperial palace in China, and a true representation of traditional Chinese architecture. The Forbidden City is surrounded on three sides by Imperial Gardens, and on the fourth side, by Tiananmen Square. You can enter via Tiananmen Gate, the Gate of Heavenly Peace. You exit through the Gate of Divine Might.

Now, the Palace Museum has converted the inner palaces to exhibition halls, where a variety of Imperial art and artifacts are displayed. It is the largest tourist attraction in China.