Teach Through Educational Travel: A Condor in Peru | WorldStrides
WorldStrides 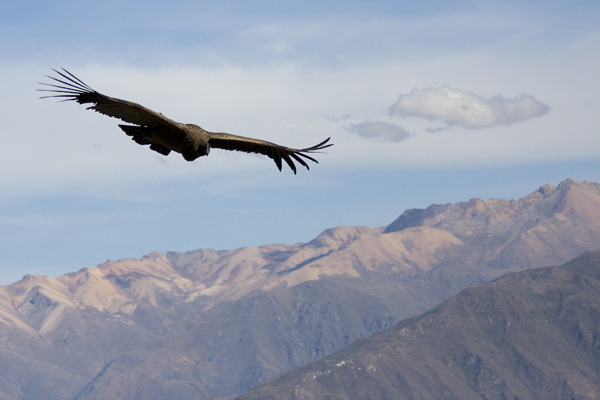 Teach Through Educational Travel: A Condor in Peru

The Andean Condor is the only member of the genus Vultur, is the largest flying bird in the world, and is recognized as a national symbol for many South American countries, including Peru, Argentina, Bolivia, Chile, Colombia, and Ecuador. The Andean Condor is near extinction, due to loss of its habitat to development, violence, and poisoning. It has a very large wingspan – up to 10.5 feet! The Andean condor is the sacred bird of the Incas. It is very long-lived; the Incas believed the birds to be immortal. They build nests in the walls of canyons, and glide on thermal currents. In the Voyage of the Beagle (1909), Charles Darwin noted that he watched one glide for a half hour, without flapping its wings.The best place to see Andean Condors in Peru is at Colca Canyon. It’s an enormous canyon, twice the depth of the Grand Canyon (two miles deep). You can drive there from Arequipa (Peru’s second largest city), and stop at the Salinas y Aguada Blanca National Reserve. There are about 50 Condors living in Colca Canyon; see them best from the Cruz del Condor viewing area.