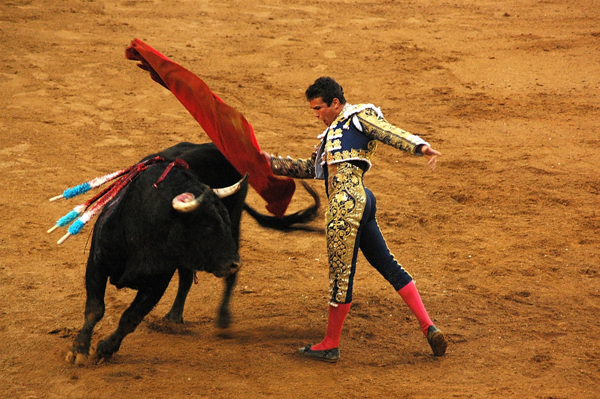 The Controversial Bullfighting in Spain

The ritual, the show, the dance, or the sport… surprisingly, one of the most representative facets of the Spanish culture is at the same time, one of the most controversial spectacles in the world!

A bullfighting show is usually on the top 10 list of traditional Spanish activities, along with the famous flamenco dancing, the tasty tapas or the refreshing and inspiring sangría. The event essentially comes down to a performance between a highly trained professional torero or matador, and the most powerful animal of the Mediterranean ecosystem; el toro de lidia, the brave bull!

… but what is exactly a bullfight?

It is one of the most famous Spanish festivities, and probably one of the oldest in the world. Bullfighting season in Spain goes from spring to autumn and is often a featured part of regional festivity. If you are looking for the heart of bullfighting, you should head to Andalucía, where many of Spain’s oldest bullrings are found in cities like Sevilla, Córdoba, or Ronda.

… but what can we expect from a bullfighting show?

The traditional social event of bullfight is known as corrida de toros, and consists of three bullfighters, each of whom performs twice bullfighting six wild bulls. The strictly ritualized event is divided in three stages, with a music orchestra announcing each part’s commencement and ending. The first part features the picadores (lancers on horseback), the second part features the daring bandilleros (flagmen) and for the grand finale the “torero” finally emerges, sporting one of the famously shiny, skin-tight “suits of lights” and wielding a sword and scarlet red cape.

Ideally the bullfighting process comes to an end when, having delighted the crowd with his confident and graceful maneuvers, the torero ends the performance with an elegant, effective and deadly movement: a final well placed sword; “the moment of truth” as Ernest Hemingway used to call it.

Whether you love it or hate it, Spain’s bullfights are definitely a draw for visitors, scholars, and the curious from all over the world, and they are considered a national and artistic treasure by many experts. But at the same time, there are many Spanish anti-bullfighting people who are completely against bullfights, not only environmental groups, but also people who are just in favor of animal rights, who see bullfighting as a total injustice and a useless torture. While taking a walk in the streets of any city, it is not rare to find stands with propaganda about bullfighting and petitions to ban these festivities. All over the country you will find anti-bullfighting demonstrations which follow one another across the whole Spanish territory.

Although there is a slight decrease in the number of followers, bullfights and other festivals involving bulls are still a reason for gatherings and enjoyment for a lot of people, above all in Andalucía, in the southern Spain. Many people there still consider bullfighting a real cultural expression of art, where the intellect of mankind challenges the strength of the beast.

For or against, one thing is for sure: the issue of bulls in Spain leaves none impartial. As the bull itself is one of the most important and characteristic symbols of the country. One even could find immense hoardings of Osborne’s bull on many of the Spanish highways. Spaniards continue to feel totally fascinated by the figure of the bull, probably because of the strength, grace, and bravery of such a powerful animal. As the ancient Spaniards used to call it during pre-Roman times; the bull is el rey de la llanura, the king of the meadow!