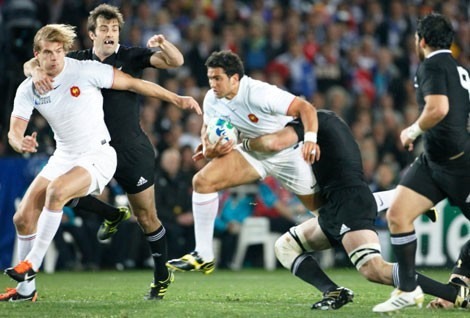 Traditionally, France is associated with soccer and it is true that it is one of the most important and most popular sports in France if not THE most  popular sport.

But lately, it seems that teenagers are becoming more interested in rugby! Rugby was already very popular in the southwest of France but it’s becoming a national phenomenon.

Rugby has become more and more important over the past few years. It might be a “World Cup effect”, considering France made it to the finals and played
against New Zealand, the best team in the world in October 2011. The whole country was supporting the team throughout the competition and a lot of kids
started to become interested in rugby, its rules etc. The fact that the national rugby team did much better in the last world cup than the national soccer
team in 2010 might explain the passion for rugby growing in the country but I believe that there are deeper roots to the phenomenon.

In the last few years, soccer players have been involved in scandals, their behavior has been quite questionable and many kids who used to see them as role
models are disappointed by their behavior and don’t want to be like them anymore. The values the soccer players of France used to embody seem to longer
matter to them. Not all of them, but it’s true that a few players have damaged the image of soccer in France.The players have become almost unreachable and
it’s difficult for teenagers to identify with them now. They are in another world, they earn tons of money, playing on the field but also starring in
commercials. It’s as if becoming a great football player was all about money. That might be why students turn to rugby, a sport that embodies the values
that soccer has left behind!

In rugby, you can’t be individualistic, you can’t win without the others. This sport conveys an idea of team spirit, of respect, of surpassing oneself. The
players are not involved in the same kind of affairs as soccer players and the atmosphere is definitely different in the stadiums.

In the past few months, some soccer games have ended up being played in empty stadiums. Not because they don’t have fans or supporters anymore but because
there have been incidents during previous games. The French federation sometimes has to take disciplinary actions against clubs if supporters are too
aggressive or violent, or if they use a smoke device, forbidden in stadiums because it’s very dangerous for fans and players.

It’s sad to see that a small amount of people can ruin the reputation of a sport because most soccer players and fans only want to have fun and see
beautiful games! Let’s hope that the image of soccer can get back to what it was and that we can enjoy the games without the madness of a few people!

As far as the rugby community is concerned, it has been growing for a few years and I think that it’s going to continue, especially since it’s getting
cheaper and cheaper to practice now. It used to be more expensive than soccer, but it’s starting to even out and it definitely helps! New generations get
interested and passionate and it can only be good news for rugby!

There are more guys interested in playing rugby than girls, even if there are a few feminine rugby teams but we can see a lot of girls supporting the teams
in the stadiums. It seems to be a sport that brings people together and draws the crowds, whether it’s for the sake of sport or to see the handsome players
on the field!