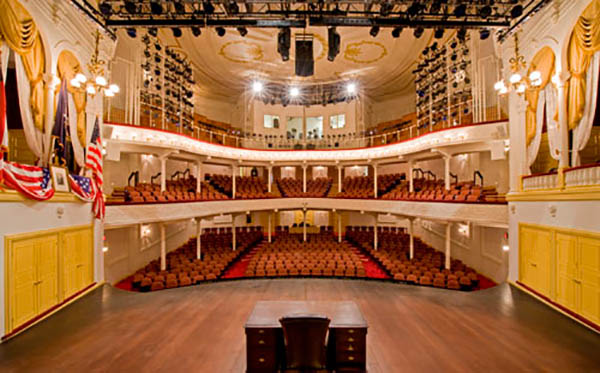 Happy Halloween from WorldStrides Onstage! Hopefully, you don’t have any ghouls in your ensembles this fall; however, spooks can be found at any time of year in haunted performance venues.

Touted as one of the most famous haunted sites in the United States, Ryman Auditorium is the well-known (though not original) former home of the Grand Ole Opry and “Mother Church of Country Music. Though the show has since moved to a larger space in Opryland, the Ryman still hosts a variety of performers – even supposedly those of the ghostly variety!

An oft-sighted famous face (and voice) is that of country music legend Hank Williams,. The most frequently reported Ryman visitor is known as “The Gray Man,” a Confederate soldier who has been seen multiple times during rehearsal and at performances sitting in the balcony, observing the stage. According to those who claim to see him, the Gray Man vanishes before anyone can approach him. Original building owner Thomas Ryman is also said to check in from time to time, expressing his disapproval with some performances (typically those that he seems to deem too risqué) with loud noises that disrupt the action onstage. In addition to the unusual activity at the theater, several people associated with the venue are assumed to have fallen victim to the “Grand Ole Opry Curse,” resulting in early deaths for many performers.

Most famous as the site where President Abraham Lincoln was assassinated, Ford’s Theater is said to have several hauntings. Attendees have recounted hearing disembodied footsteps – attributed to John Wilkes Booth – running up the back stairs to the President’s box. Others have heard someone shouting “Murder!” Reported sightings have included Mary Todd Lincoln leaning out of the President’s box, shouting “He has killed the president!”

The Belasco Theater in the heart of Manhattan’s theater district is supposedly haunted by its namesake, prolific playwright, producer, and director David Belasco. Since his death in 1931, performers and other theater staff reported sightings of Belasco watching rehearsals from the balcony or his private box, identifiable by the clerical collar to which he was accustomed to wearing. Other interactions attributed to the impresario have included him speaking to performers and shaking actors’ hands, invisible pinching the behinds of actresses, and ransacked dressing rooms after bad performances. An elevator, long since functional, is also heard to go to and from Belasco’s sealed-off private apartment.

The Orpheum Theater, a popular live music concert venue in Vancouver, opened as a vaudeville theater. The venue later transitioned into a movie theater before its current incarnation, however, it appears that a few beings from its earlier days have stuck around. The most prominent of the Orpheum’s apparitions is a vaudeville acrobat known to have fallen to his death during a live performance. Theater staff have recounted seeing him onstage as well as an orb of light in the same area that vanishes quickly once noticed. A ghostly washroom attendant in the downstairs men’s restroom appears still ready at his post. Performers at the Orpheum need not fear an empty house – there’s a female apparition in the upper tier of the audience who seems to give a standing ovation to a performance from the past.

Currently a night club, film and television location, and music venue, Avalon Hollywood began its life in 1927 as The Hollywood Playhouse. Later renamed The Palace Theater, the three-story building is host to show business history and hauntings for all senses. Guests and staff at the venue have heard bodiless jazz piano tunes emanating from the comedy room, smelled perfume of a female spirit, experienced a couple chatting and laughing in the balcony (much to the annoyance of patrons) – even when the balcony is closed, and seen a tuxedo-clad gentleman all around the theater. Harry, reported to be an electrician from the 1940s, is assumed to be the space’s resident prankster.

We hope that this has given you a little break from your busy fall season and your performances are phantasm-free!

Looking for the chance to visit some of these haunted venues? We have Music Festivals in each of these cities!