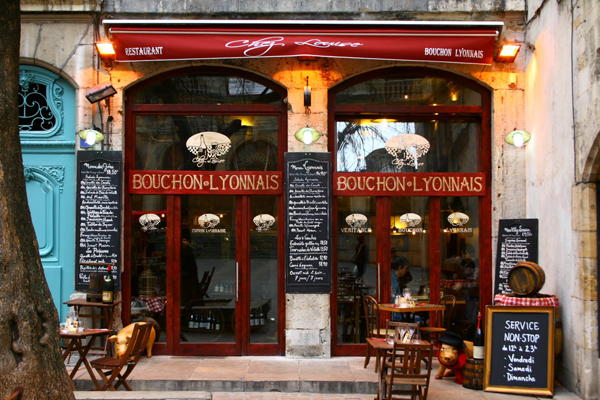 “We are the Gastronomic capital of the world you know” – I was proudly informed by my new colleagues when I arrived to start a new teaching placement in Lyon, France’s second city which sits in the Eastern corner of the country. I had to admit that I had barely heard anything about the city before, let alone this wild claim, but I quickly took it upon myself to put it to the test.

DEMO BLOCKQUOTE “We are the Gastronomic capital of the world you know” – I was proudly informed by my new colleagues when I arrived to start a new teaching placement in Lyon, France’s second city which sits in the Eastern corner of the country. I had to admit that I had barely heard anything about the city before, let alone this wild claim, but I quickly took it upon myself to put it to the test.

I headed straight for the famous “Bouchons”, the traditional Lyonnais bistros with red and white checked tablecloths, the best of which are concentrated in the presqu’ile – the “almost” Island that is formed by two rivers, the Rhone and the Saone, that join together underneath. Bouchon, (which means ‘traffic jam’ in the rest of France), comes from the word ‘bouche’; a small bail of straw that was hung over doorways in the Middle Ages, telling travelers passing along this well trodden north-south route, that this was a place they could get a good meal.

Perusing the menu, I assumed my Google translate app had become a little confused as I read the descriptions… a ‘Fireman’s Apron’ of breaded, fried tripe; a pig’s head; a pig’s brain in vinaigrette; calves trotters, and something called ‘Silk Weaver’s Brains’ (which thankfully turned out to be just an innocent cheese with chives). Leaving a little traumatized, for my next visit I thought I’d better take a Lyonnais with me for some advice. This was when I learned that the popular ‘rosette’ de Lyon – a sausage filled with lower part of a pig’s intestines – takes its name from the ‘rose’ color of the orifice at the very end of the pigs intestines! Yes, Bouchon food is heavy, and not for the faint of heart. Even the apparently lighter options, such as the ‘Salade Lyonnaise’ comes with fried toast, fried bacon bits, and dripping in creamy pig lard.

Not having the most daring of palettes, I was pointed in the direction of one of the only exceptions to this rule – the sublime ‘Quenelle’; a soufflé textured, poached, pike fish sausage covered in a creamy sauce. It was invented by La Mère Brazier – one of the so called ‘Lyon Mothers’ who left the kitchens in their homes in the early 20th century to work in the city’s restaurants, creating brand new culinary creations and giving birth to the true and marvelous Lyonnais cuisine. Eugénie Brazier became the first woman to be awarded 2 Michelin stars in 1932, and she was one of the first in a long line of legendary French chefs, an uncannily large number of whom originate from Lyon.

DEMO BLOCKQUOTE Yes, Bouchon food is heavy, and not for the faint of heart.

The city is undoubtedly most proud to lay claim to superstar chef Paul Bocuse, now aged 87 and living above his 3 Michelin starred restaurant in the outskirts of the city. He has bestowed his name to numerous culinary schools, food markets, and also the most prestigious award for chefs in the world, the ‘Bocuse D’Or’; also described as the unofficial world chef championship (which conjured up images of large scale spatula battles in my mind). Along with his contemporaries, Paul Bocuse contributed to the creation of a lighter, simpler nouveau cuisine, based on the philosophy of using good quality, fresh ingredients. The lucky thing for Lyon is that its geographical location puts it at the heart of a huge back yard full of the best quality products in France.

To the north there are the vineyards of the Beaujolais and the high quality beef from the Macconais; to the west the fertile hills of Lyon produce fruits, vegetables and fattened up ducks; to the south you have the delicious wines of the Rhone Valley; and to the east you have St Micellin cheese producers and the lakes of Savoie bursting with crayfish and carp. Lyon is also spoilt for choice for products belonging to France’s highly complex system of controlled branding (APC). No matter what you want to buy in France, there is always somewhere that does it best, and you can find them by their APC labels – for instance poultry (from Bresse), lentils (from Puy) and wild mushrooms (from St Bonnet le Froid).

So, ‘Gastronomic capital of the world’? Probably not. Of France? Perhaps. Paris certainly has more Michelin stars, but it is true that Lyon is more revered. Maybe it’s the big name chefs, or the delicious ingredients, or perhaps it is simply a passion for tradition that gives Lyonnais food its name. People say that the food here in Lyon IS what it used to be, and that’s what makes it so special. There is no doubt about its prominent role in society – food is at the top of everybody’s list of topics; with talk of where to eat and what to eat coming way before the question of when. One thing is for sure, it really doesn’t matter what I think. For the Lyonnais, Lyon rules, and so it will remain.

Want to take your class to Lyon? Check out some of our Paris, Provence, and Lyon tour or view our other educational tours to France.