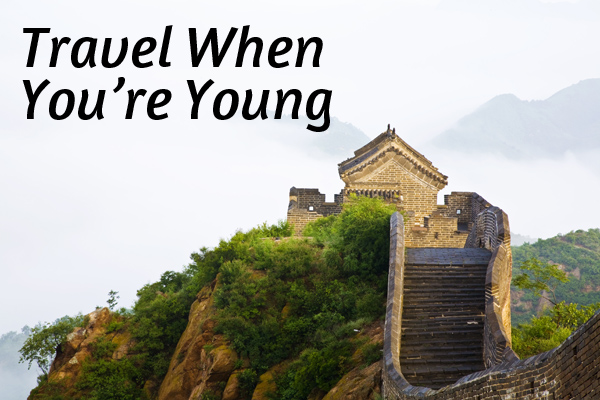 I work in student travel, in educational travel, and with great enthusiasm for it. But my path to being here did not begin with my traveling when I was a student. My path may have been influenced by my leading student trips myself during my dozen years of teaching. But it began, oddly, by NOT traveling as a student.

As a high schooler I wanted to travel. I watched programs on Africa, Asia, Latin America, Europe, and more, and I wanted to go. There were actually trips offered at my high school, back when those were a rarer option. And those trips sparked my second driving force. Jealousy. Not of the students, but of their travel! When I speak with teachers about trips, I often talk about how the trips influence and often enhance even those who don’t know. I should know, as I was one influenced. By the stories told, by the jealousy, and perhaps most of all by realizing in seeing my peers travel that it was possible.

But then I thought back to my days in high school, having heard the price of traveling, and not telling my single father as I assumed it would be too costly and too much of a strain. So, twenty years later, I asked him about it. He would have sent me he said, and wished he had known I had those interests.

Well darn. I could have gone. Far earlier than I did. But I did travel later, have been to well over 50 countries on stays long and short, and I am fine now, right? The theory of cognitive dissonance says I am, or at least believe I am. But I know better.

My travels came after college. And, my father’s point in a way, and fully ironic, they matured me to the point I would have asked him about sending me abroad in high school. After those expensive years in college. After those expensive-to-local-taxpayers years in high school. After those French classes I, not worldly aware, found uninteresting. After those history classes that I thought were about things only in the past. Suddenly I was grabbing any book I could, reading as much about history as I could, on trains, planes, buses, and boats. Late into the night and early in the morning. Buying phrase books and asking people how to say things. Fascinated suddenly by how languages overlapped and differed all at once. Good as that was, the work world beckoned. I am still short of being bilingual. For all the inspiration my first trip and then subsequent trips provided, they also let me know how much I don’t know.

A student in Michael Heitz’ (one of our traveling teachers) French classroom returned from tour changed. He participates in class with focus, no longer goofing around. Other students, missing the fun of the foolishness, ask him what’s up. I saw it, he tells them. France is amazing. I want to learn this stuff, he says, don’t distract me. Some of them gain in focus.

I taught all subjects for 7th and 8th graders in a small middle school. One often unmotivated student, having enrolled in a educational tour abroad, found a tutor for language lessons long before we departed. The whole group was coming in regularly sharing with me things they found out about where we were headed. He and the others on that trip came back energized. Their work came in early, dripping with greater depth of thinking, stretching beyond the minimums by far. They and their parents talked of a turning point, of academic interest lasting through high school and college. Raised grades. Seeking out harder classes. Getting into programs once thought out of reach. While I might have hoped for all that, I noticed they were having much much much more fun learning. It was their world, and they were making their own owners manual, minds wide open! Their aspirations were greater. Their energy to get there was greater. Some of this rubbed off on those who stayed. And, oh hey, did I mention my teaching job was much much much more fun?!

The transformational wonders of involvement, of travel, of seeing the bigger world and adding choices, pathways, new ways of looking at, new ways of saying, new ways of enjoying an inspired life! Like learning a language, starting late is always better and certainly not evil. But the earlier you start, generally, the easier it is, the more one builds on what came before, and the greater the gains—even in perception, and joy!!

Start the transformation within your students – browse our amazing educational travel programs abroad!