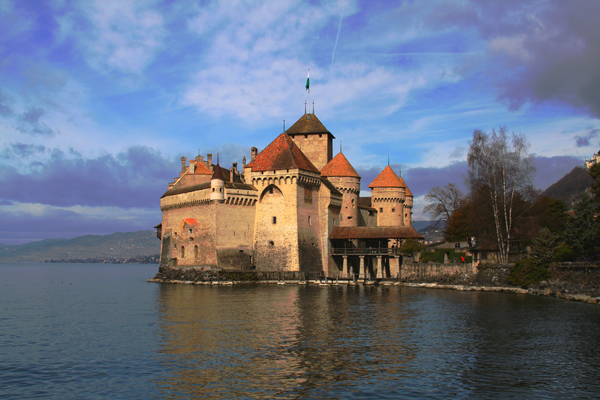 Chillon Castle (Chateau de Chillon), Switzerland’s most famous castle, is also known as the Water Castle on Lake Geneva. The Castle was built on a rocky island, which helped early owners (including the Counts of Savoy who owned the Castle for almost 400 years) control the flow of goods and passage of ships from northern to southern Europe. The Castle is over a thousand years old, and is comprised of over 100 buildings, from the luxurious lake side to the fortress-like mountain side, with watch towers, a moat, and more military accoutrements.The Castle has made an appearance in several pieces of literature, notably Lord Byron’s poem, The Prisoner of Chillon (1816), Jean-Jacques Rousseau’s Julie or the New Heloise, and Henry James’Daisy Miller (1878). Of special note within Lord Byron’s poem are the subterranean gothic rooms, in which he placed his hero, Bonivard, in the underground dungeon. .

Today, visitors can see a fully restored Castle, complete with guided tours and excavated antiques, including weapons. There is the aforementioned underground dungeon, four great halls, three courtyards, several unique rooms (including Camera Domini, which boasts a bestiary of 14th century murals), a chapel, and a weapons room.