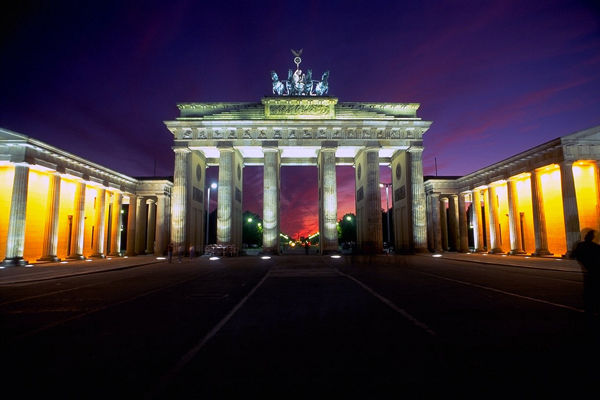 Constructed in 1791, Berlin’s Brandenburg Gate (Brandenburger Tor) was commissioned by Friedrich Wilhelm II as a grand gesture, to represent peace. It is the most well-known landmark in Berlin (and Germany), and now serves as a symbol of the reunification of East and West Berlin. It is a former city gate – and the only remaining gate into and out of the city. Now, the Brandenburg Gate is closed to automobile traffic, only allowing pedestrians and bikes.Structurally, the Brandenburg Gate is composed of 12 Doric columns (six on each side), allowing five separate passageways. This design was based on the gateway to the Acropolis, and is capped by the Quadriga, a statue of the goddess of peace driving a four-horse chariot.

Historically, the Brandenburg Gate has played an important role, spanning centuries. When Napoleon conquered Berlin in 1806, he took the Quadriga to Paris. When the Quadriga was returned to Berlin in 1814, her olive wreath crown was replaced by an Iron Cross, and she became the goddess of Victory. When the Nazis were in power, they used the Brandenburg Gate as a symbol of their power. It was also the only structure left in the Pariser Platz after the bombings during WWII. In 1961, the Berlin Wall was built to separate East and West Berlin, and the Brandenburg Gate was located on the East Side. In that era, many politicians called for freedom on the West side, including John F. Kennedy, Richard von Weizsacker (the mayor of West Berlin in the 1980s), Mikhail Gorbachev, and Ronald Reagan. When the Berlin Wall (and Communism) fell in 1989, the gate once again symbolized freedom and city unity.

Since then, the Brandenburg Gate has been the site of many concerts, with both internationally famous bands and local buskers playing there. The square is populated by tourists, bicyclists, and Germans going about their everyday business. It is also immortalized in Lego’s Architecture Series, and you can even buy a kit to build, in Legos, the Brandenburg Gate yourself.

Download a larger image and share the photo with your class, then try these discussion questions and classroom activities:
Take a look at these photos, showing the importance of the Gate throughout German history. What surprises you about the changes to the area surrounding the Brandenburg Gate over time? Discuss how wars change a city – both in terms of destruction, and protection.